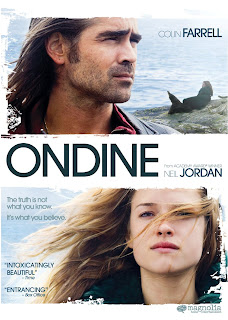 Ondine is one of only two movies I know of that employ the Celtic myth of selkies as part of the plot.  The other is 1994’s The Secret of Roan Inish, which I just reviewed.  Unlike that film Ondine is set in the present day and is darker in tone.  Since it is from director Neil Jordan (In the Company of Wolves, The Crying Game, Michael Collins) you know that if this is a fairy tale, it is not going to be all sweetness.  It is ambiguous for quite a while if there is something fantastical happening or if there are real world explanations for everything.  Unlike Pan’s Labyrinth the viewer does get a definitive answer, which then drives the end of the film.  The result is a great mixture of joy, sadness, mystery, romance, and a little bit of peril.
Ondine stars Colin Farrell as an Irish fisherman named .  It is probably the second best performance of his career.  I would place only his work in In Bruges above it.  (You can read my review of In Bruges here.)  is mostly known by his nickname of “Circus”, which he earned from several years of drunken behavior when he was younger.  He has managed to get sober and has tried to straighten out his life.  The catalyst for this was his little daughter Annie (Allison Barry) having medical issues.  She is suffering from kidney problems and has to have dialysis.  She is also in a motorized wheelchair.  She spends a lot of time reading and dreams of Annie one day being able to go off to study and get a good job – something he never had the opportunity to do.
Annie lives with her mother Maura (Dervla Kirwin) and Maura’s live-in boyfriend Alex (Tony Curran).  When and Maura were together she was just as hard a drinker as he used to be, but unlike him she has never gotten better.  She and Alex still go out and get drunk all the time.  tries to take his daughter with him as much as possible to protect her from them.  Ultimately, though, Maura has custody of Annie because courts will almost always favor a mother over a father, no matter the circumstances.  and Maura have a strained relationship, but try to remain civil for Annie’s sake.  Alex actually shows a little more depth of caring for Annie than her own mother does.
One day is pulling in his fishing nets and finds an unconscious, nude woman in them.  He manages to revive her and she seems quite disoriented at first.  Once she calms down a little bit, she is able to communicate with him, although she speaks a little strangely.  She says her name is Ondine.  She is played by Polish actress Alicja Bachleda.  Director Neil Jordan cast her precisely because she would be an unknown face to most people in the audience.
Ondine doesn’t want to go to land, or anywhere near people for that matter.  finally convinces her that he has a place she can stay.  It’s an abandoned cottage that his mother used to live in.  It’s right on the water.  Since Ondine has no other choice, she agrees.  When picks up Annie he tells her about what happened, pretending it is a story.  Annie believes him, and she thinks she knows what is going on.  Once she meets Ondine, Annie is convinced: Ondine is a selkie.

Selkies are seals that have shed their skin to become human for a while.  If a fisherman finds one he can keep her with him if she cannot find her seal skin to put back on and return to the sea.  By the way, the name Ondine is another connection to a mythical creature.  Undines were water elementals, or water nymphs.  They have been used in many works of literature, usually with men falling hopelessly in love with them, only to have the Undine leave them for the sea.
Needless to say, the more and Annie spend time with Ondine, the more both of them start to fall in love with her - especially.  takes her out on his boat with him and she sings a song he has never heard.  That day he has the biggest haul of fish he has ever seen, in waters that have almost no fish left in them.  The next time he takes Ondine with him the same thing happens.  She appears to be singing the fish into his nets.
isn’t an educated man, but he didn’t really believe at first that he had found a mythical creature.  After this he starts to wonder.  He tries to talk to the local priest (Neil Jordan mainstay Stephen Rea) about it.  can definitely be described as someone who “if it weren’t for bad luck, he’d have no luck at all”, so he is suspicious of the fact things have been going so well for him ever since he found Ondine.
Ondine has started to “keep house” in the cottage and both and Annie find ways to sneak over there more often than they truly need to.  It’s good that they are keeping her a secret because there is also another stranger in town.  A man has been seen around the docks and he may be looking for Ondine.  Is this her selkie husband, come to claim her back from the fisherman who has captured her?  Meanwhile, Ondine has been searching for her seal skin.  If she finds it, or if the strange man finds her, things could be bad for the hearts of both and Annie.
People who are only used to Farrell playing loud, tough, foul mouthed characters may be surprised by the nuanced performance he gives in this film.  is a great father who truly cares for his daughter and doesn’t want to see her get hurt, especially not by her mother.  He is also a lonely man who has not felt love for a woman for a long time.  The more time spends around Ondine, the more he falls under her spell.  Art mirrored real life, too.  Farrell and Bachleda started a romance of their own.  They had a child together, although the relationship eventually ended.
The film Ondine, while not as dark as Pan’s Labyrinth, definitely has some of the darker elements of peril found in fairy tales.  It is an all around good movie.  I’m not sure who would dislike it, so I can’t really think of who to warn away from it.  I highly recommend this film.
Chip’s Rating: 4 out of 5 stars