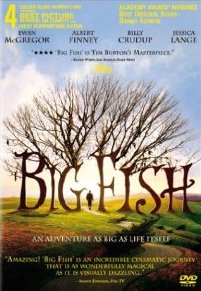 Like Edward Scissorhands, Big Fish is another tale from Tim Burton of an extraordinary man.  In this case, based the film on the original novel by Daniel Wallace.  Both book and movie tell the life story and adventures of Edward Bloom – sort of.  You see, Edward tells what some people call tall tales, while others, like his son, call them lies.  The result is a bittersweet mixture of the fanciful and the down to earth, and we come to realize that the truth, as it often does, lies somewhere in between.
Will Bloom (Billy Crudup) is getting married to Josephine (Marianne Cotillard in her first American movie).  At the wedding Will’s charming and charismatic father Ed (Albert Finney) tells a fanciful tale of Will’s birth.  The guests are amused by it, but it angers Will and he and his father have a falling out.  They do not talk for years.  One day, Will gets a message that his father is dying.  In hopes of better understanding his father, Will and the pregnant Josephine travel to to be near him.
Since he is soon going to be a father himself, Will wants to really connect with his own father.  Will asks Ed to tell him about his life, and to leave out the lies.  Ed tells Will about the town he lived in when he was little and the local witch (Helena Bonham Carter) that lived there, too.  The witch revealed to Ed how he was going to die, so this has allowed him to be adventurous his whole life, because he always knows he will be safe.  He grows too fast for his body, meets a giant who is causing distress to the town, and becomes a local hero.  Ed (now played by Ewan McGregor) and the giant decide to set off to see the big world around them, since the town is too small to contain them.  They are big fish in a small pond.
They separate at a forest, with Ed going through and the giant going around.  Ed finds a small town hidden in the forest.  Everyone there goes shoeless and no one ever leaves.  He meets a small girl named Jenny, who says she loves him.  He promises he will return someday.
Ed and the giant meet back up on the other side of the forest and find a circus.  The circus owner (Danny Devito) hires the giant to perform.  Ed sees a young woman (Alison Lohman) in the crowd, but cannot find her afterwards.  The circus owner knows her and promises to tell Ed a little more about her in return for working at the circus for free.  Ed agrees.  He eventually finds out enough about the girl to leave the circus and go court her.  He tells her he has been in love with her since he first saw her.  She is engaged, but that is no problem for the always successful Ed.  After wooing her with thousands of daffodils the two are soon married.  She is Will’s mother.
Needless to say, this is not what Will wants to hear.  It just makes him angrier at his father, because he wants to connect with him before he dies, but he feels this is just keeping him from knowing the real man.  Will’s wife Josephine has taken a real shine to Ed, though, and she calms Will down.
Ed continues his story which includes fighting in the Korean War, meeting conjoined twin singers, being declared lost in action, meeting a bank robber (Steve Buscemi), and returning to the town in the forest to meet the now grown up Jenny (also Helena Bonham Carter).  Will’s mother (the older version is played by Jessica Lange) shows Will the telegram she received about his father being declared lost.  She does it to show him that Ed is telling the truth – in his own way.
The older Ed eventually has to go to the hospital.  While he lies dying, Will finally comes to understand his father – that the tales are who his father really is, even if they are not 100% true.  For the first time he imagines how his father’s life might end, in a way that Ed might tell himself.  As I mentioned at the top, Will finds out that his father has led an extraordinary life, and that the truth can be different things to different people.
The casting of Albert Finney as the older Ed and Ewan McGregor as the younger Ed might be the best younger/older casting of the same role that I have ever seen, at least among unrelated performers.  Sometimes filmmakers will use parent/child pairs (i.e. Queen Elizabeth in Anonymous) or sibling pairs (the title character in the TV series Dark Angel) precisely because these related people look a lot like each other.  In the case of Big Fish, someone noticed how much Albert Finney looks like Ewan McGregor and got the bright idea to cast them together.  Here’s a picture of the two of them. 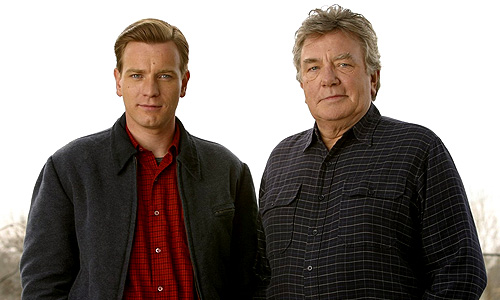 Don’t think they look that much alike?  Here’s a picture of the two of them at comparable ages. 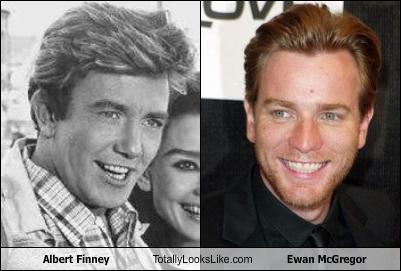 One other note – in addition to Cotillard making her American movie debut, watch for a pre-fame Miley Cyrus as a friend of the youngest version of Ed.  This is the first movie she ever appeared in.
Unlike other Tim Burton movies, Big Fish flew a little bit under the radar.  Perhaps after the disaster that was the 2001 Planet of the Apes remake, which is best forgotten, and the studio decided to take a quieter approach on this film.  After it was well received, they went back to being loud again – and delivered another remake of a classic film (2005’s Charlie and the Chocolate Factory), which is also best forgotten.
Like Edward Scissorhands, if you prefer your movies to be down to earth dramas, then Big Fish is probably not the movie for you.  For everyone else, I highly recommend this film.
Chip’s Rating: 4 out of 5 stars