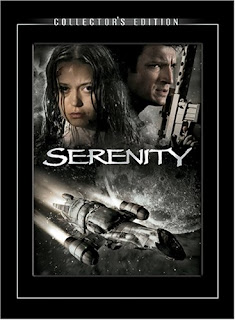 Serenity was a movie Joss Whedon wrote and directed based on his TV show Firefly.  Please see my post on the TV series here.  It was a hugely satisfying movie, not just for fans, but also for people who had never seen the TV show.  One reviewer said that this was the kind of movie that Star Wars fans wished George Lucas was making when he was doing the prequels.  I consider this movie to be the best science fiction film released since The Matrix had come out six years earlier.

The movie has the entire original cast from the TV show.  In addition, they have Chiwetel Ejiofor (Amistad, Children of Men) as the main bad guy and David Krumholtz (Numb3rs, the Harold and Kumar movies) as Mr. Universe.

The movie opens with a classroom that has a quick “history” lesson of humans colonizing space for people that are not familiar with the show.  It then shows how Dr. Simon Tam rescued his sister River from the government’s experiments.  Finally, it introduces the ship Serenity, and the people on it.  All of these things skillfully bring non-viewers of the TV show up to speed.

The story picks up several months after the TV show ended.  Both Shepherd Book and companion Inara Serra have left the ship.  Both are in the movie, though.

The driving story is that the government has finally decided to bring out its big guns in trying to get River Tam back.  She was a highly valuable potential asset for them, and she may have government secrets locked up somewhere in her head.  In this movie Summer Glau, who plays River, really gets to shine.  It had been hinted in the TV show that she had some fighting skills in her head, and in this movie they came out.  She trained for months prior to filming in order to get the moves down.  In one of his commentaries for the movie, Whedon says that her fighting scenes were not sped up; she really was that fast.

Like all Whedon creations, this movie has a great blend of humor, drama, action, and oh my God moments.  He knew this was likely the only chance he would have to extend the story for these characters so he pulled out all the stops.  Major things happen in the movie and not everyone makes it through okay.  You also find out the answer to almost all of the questions the TV show did not get a chance to answer.

I have not read it, but some of those questions may have been addressed in a limited series comic book that Whedon wrote that bridged the time between the TV show and the movie.

This is one of the top two or three best science fiction films of the entire decade.  It is in the top 15 best movies of any kind of the entire decade.  Please do not avoid this movie if you have not seen the TV show.  While you will get the fullest possible experience from it if you watch the show first, it is still a highly enjoyable movie for everyone.  I give it my highest recommendation.