Movie – Done the Impossible: The Fan’s Tale of Firefly and Serenity (2006) 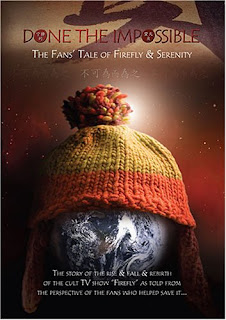 Done the Impossible is a documentary about the fans and fandom of the Firefly TV show and the 2005 Serenity movie.  These people call themselves “Browncoats”.  It includes excerpts from extensive interviews the filmmakers did with pretty much the entire cast and creators of the show.  Its appeal would be for those people who are themselves fans (which is tens of millions of people.)  If you have not seen the show or the movie, or have seen them but didn’t like them, then this movie would not be for you.
The documentary is hosted by Adam Baldwin, who played Jayne Cobb on the show and in the movie.  It takes its title from a line Joss Whedon uttered during his introduction of the movie Serenity.  Please see my video post here for that intro.
If you have seen the movie Trekkies (1997) about Star Trek fans then this is a similar kind of movie, except most of the people featured in Done the Impossible are not as strange.  The best thing about the movie for me was the interviews with the cast.  They seemed more than accommodating to the filmmakers since they loved the show, too.
The people who made the documentary were professional DVD producers by trade.  As such, they included a ton of extras on the disk.  The movie shows excerpts from the interviews they did.  In the DVD extras you can see the entire interviews.  There are probably hours more content to be found in the extras.
One of the things they got too cute with was the easter eggs (hidden features) they put on the DVD.  There are five of them and they intentionally made them difficult to get to.  The easiest one to get to is also the only one I would recommend you spend time finding.  At 20:18 into the movie you will see a couple singing and dancing.  An icon of Thor will appear on the lower right of the screen for a few seconds.  Press the Enter button on your remote while the icon is visible.  This takes you to a sequence where Nathan Fillion helped the man (whose name is really Thor, hence the icon) propose to the woman.  It’s a great scene and the filmmakers should have put it in the main movie, not made most people miss it unless they knew to look for it.
I loaned this to another Firefly/Serenity fan and he did have one negative observation.  For him the constant references to how horrible it was that the TV show got cancelled so soon finally got to be too much for him.  He said that at a certain point he felt like telling them to just get over it.  I laughed when he told me this.
Netflix does not have this movie available to rent, so pretty much the only way to legally see it is to buy it.  If you liked Firefly and/or Serenity then I highly recommend this movie.
Chip’s Rating:  4 out of 5 stars