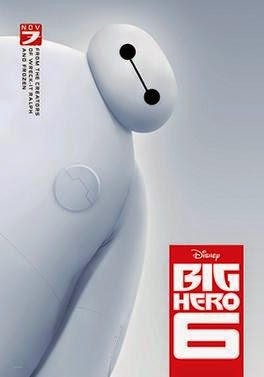 Big Hero 6 recently won the Oscar for Best Animated Feature Film.  I have seen four of the five nominated movies, only missing Song of the Sea.  Of the ones I have seen I don’t feel there is a clear best film among them.  The Boxtrolls would be at the bottom for me, but this film, How to Train Your Dragon 2, and The Tale of the Princess Kaguya all have a similar level of quality and entertainment to them.  And all three have characters dealing with a loss at key points.  The other major awards reinforce the parity among the films.  The Annie Awards (ones specific to animation) also picked Big Hero 6, but the Golden Globes selected How to Train Your Dragon 2, and the BAFTA awards picked The LEGO Movie.  Regardless, Big Hero 6 is a good movie that can keep both children and adults entertained.


Speaking of children, the film is rated PG and I’ve seen multiple posts from parents bitching about the fact that they didn’t think things such as a joke about puberty were proper elements for a children’s film.  You’ve got to love people who think “PG” means “You can be a lazy parent and not worry about your kids seeing anything you might object to” instead of “Parental Guidance Suggested – there are things you may find objectionable for your children so you should see it first before allowing them to watch it.”

Big Hero 6 was quite popular and did well at the box office.  This is despite the fact that there are no big stars lending their voices to the characters.  This illustrates something I’ve believed for a long time.  Other than Robin Williams as the genie in Aladdin I’ve never felt that having a famous person do the voice of an animated character did anything to make a movie better.  What matters is how entertaining the movie is.

Speaking of voices, it’s been about 20 years (1995’s Pocahontas) since the political correctness storm blew through and made studios ensure that they had people with ethnicities matching the characters actually do the voices.  Sure enough, in this film a black man (Daman Wayans, Jr.) voices the black man (Wasabi), an ethnic Korean woman (Jamie Chung) voices the ethnic Korean woman (Go Go), and they even have two Eurasian actors voice the two Eurasian brothers (Ryan Potter as the younger brother Hiro and Daniel Henney as the older brother Tadashi).  So it amused me quite a bit to find out that the two white women were voiced by Maya Rudolph (Aunt Cass) and Genesis Rodriguez (Honey Lemon).  At least the white guy was voiced by a white guy (T.J. Miller as Fred).

In an alternate reality set in the city of in the present day, Hiro is a fourteen year old boy who has already graduated high school because of his genius.  He has no interest other than hustling people at robot street battles, though.  His older brother Tadashi takes Hiro to the university where Hiro meets Tadashi’s friends Wasabi, Go Go, Honey Lemon, and Fred, but more importantly, sees all the cool inventions they are working on.  In addition, world famous scientist Robert Callaghan (James Cromwell) leads the students there in their work.  As Tadashi hoped, this sparks an interest in Hiro to also attend.  Their Aunt Cass, who has been raising them, is delighted.

To do this Hiro has to win a contest developing something new.  He chooses to build miniature robots that can combine together into almost unlimited applications and that are controlled via thought.  A businessman named Alistair Krei (Alan Tudyk) sees the huge potential in this and offers Hiro a ton of money for it.  Callaghan warns Hiro that Krei is not a nice guy and Hiro decides to keep the invention for himself.  Later that evening, though, the building catches on fire, killing everyone within it and destroying Hiro’s invention.  Or so it appears.

Hiro finds out that a masked man has apparently stolen the little robots and is using them for his own nefarious scheme.  Hiro enlists the aid of Wasabi, Go Go, Honey Lemon, and Fred to go after this man and stop him.  Using variations of their own inventions they outfit themselves as a superhero team.

What’s that you say?  That’s only five people so where does the name “Big Hero 6” come from?  Tadashi’s invention is an inflatable robot named Baymax (Scott Adsit) whose primary purpose is to see to people’s health care. With some modifications built by Hiro, including a cool set of flying armor that looks like a samurai version of the Iron Man suit, they are now six.

The humor in the film comes primarily from the inflatable nature of Baymax, along with his misunderstandings of what Hiro really wants.  Many of those jokes already appeared in the trailer for the film.  My favorite piece of trivia about the movie is that the animators modelled Baymax’s walking and movements after those of toddlers with full diapers.

There is also drama in the movie.  Without going into specifics there is a loss to deal with.  There is also supposed to be a mystery, but there’s not much question as to who the bad guy is.  The movie practically puts a blinking neon sign pointing at who they want you to believe it is, making it obvious that it’s not going to be that person.  Kids will probably still be surprised, but adults (especially ones who watched Scooby-Doo cartoons as a kid) may feel it takes too long to get to the reveal.  And I can’t be the only person out there who was hoping for the bad guy to say, “And I’d have gotten away with it, too, if it weren’t for you meddling kids.”

I liked the action sequences.  The various hero costumes/abilities logically extend from the inventions, making them plausible in the world of the movie.  I liked Go Go’s outfit and weapons the best.

The design of the world of the movie is interesting, too.  They show a Japanese influence to the design of many things from as small as sliding panels in houses to as big as the .  These things reflect the original nature of the comic, which was published by Marvel.

Although this is officially a Disney film, since they also own both Pixar and Marvel there were elements from those studios thrown in as well.  Most of these were characters from other Disney and Pixar films appearing as toys, statues, etc. in scenes.  The Marvel influence was more overt, with Stan Lee making a cameo, and it took place in an after credits scene – something all the Marvel-owned films have.  Prior to that scene watch for Lee’s image to appear in a family portrait.

Despite some things that will probably appeal mostly just to children, this is still an entertaining film.  I would have liked to have seen more superhero scenes, but you could consider this an origin film and I can easily see a sequel being made.  If so, there will probably be more “superheroing” in that one.  If any of this sounds interesting then I recommend you give this film a try.