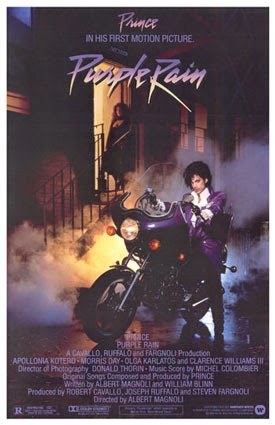 To a lot of people nowadays the 1984 Prince film Purple Rain is probably seen as a kind of kooky snapshot of a very specific time in music – the same way some people think of Saturday Night Fever (1977).  What many of those same people tend to forget, though, is all the very popular songs that came out of both films – songs that will still get people humming, tapping, or dancing along to them.  At the time the film Purple Rain came out it was a phenomenon.  It pretty much took over popular culture for a while with both the movie and the music dominating the airwaves, and the videos dominating this new channel calling itself Music Television, or Mtv for short.  And while Prince had had a few hits prior to this, the combination of this film and the soundtrack shot him into the stratosphere.


The movie sort of has the concept that it’s the story of Prince’s life, but it’s mostly fictional.  He plays a talented, but undiscovered musician whose backup band, The Revolution, are second stringers to the real talent in the area – Morris Day and the Time.  In reality it was Prince who was the star and he was also the hand behind Morris Day, including writing his songs for him.  Prince also wrote the title song, although the film says it was Wendy and Lisa, two of the women in his band.  Everyone other than Prince and the professional actors in the unnamed roles of his parents (Clarence Williams III and Olga Karlatos) plays a character with the same name as themselves, further blurring the lines between reality and fiction.

One thing that has confused people is that the film shows Prince’s character, known only as “The Kid”, with a black father and a white mother.  Many people thought this paralleled his actual heritage, but both of his parents were black.  In Purple Rain he has a relationship with Apollonia Kotero, who is of Mexican ancestry.  Originally it was going to be Prince’s protégé/lover Vanity who would be the female lead, but she broke it off before filming started.

While this film primarily exists to showcase the talents of Prince it does contain some story worth paying attention to, especially that of the rocky relationship between The Kid and his father.  The man has a temper and we find out The Kid does, too.  As the film goes on we see other parallels between the two, ones that The Kid doesn’t even realize are there.

The overall plotline is pretty basic: young, talented performer has a group of fans, but his personal demons are causing him to underachieve.  His ego prevents him from accepting this, or from accepting the fact that his backup band might have some songwriting talent, too.  A girl new to the city (Apollonia) hooks up with him, but their relationship is as rocky as that between The Kid’s father and mother.  The Kid’s rival, Morris Day, takes Apollonia under his wing and sets her up in a girl group, further increasing the rift between him and The Kid.  Things eventually come to a head with The Kid’s father, causing The Kid to finally take a hard look at his own life.

But enough about the plot, let’s talk about the music.  This film produced several hits, both for Prince and for Morris Day and the Time (i.e. Jungle Love).  And making them even better was the fact that most of them were recorded live, rather than being canned studio songs.  The energy in some of them, especially the opening number Let’s Go Crazy, really comes through.  Because of the huge “Prince-ness” that surrounds him, what with the image and actions, his guitar playing often gets overlooked.  He lays down some serious riffs in this song.

Prince had number one hits with When Doves Cry and Let’s Go Crazy, and he had a number 2 hit with the title song.  There’s a bonus with When Doves Cry in that the lyrics actually pertain to the story in the movie.  Other ones that were popular were Take Me With U, The Beautiful Ones, I Would Die 4 U, and the infamous Darling Nikki, whose lyrics caused Tipper Gore to somehow think that as the wife of a U.S. Senator she could determine what music younger people should and should not listen to.  Her “legacy” is that she got warning labels places on music albums (and later CDs) saying that there was foul language on them – which served to increase their sales many times over, thus exposing far more people to their lyrics than ever would have heard them without the “warning label”.

Prince did receive an Oscar nomination and won…for Best Original Score.  Surprisingly, despite all these big hits, including one whose lyrics actually showed it belongs in the film, not one of them even received a nomination.  The five songs honored that year by the Oscars were Against All Odds, Ghostbusters, Footloose, Let’s Hear It for the Boy (I gagged as I typed that), and the winner I Just Called to Say I Love You.  They are all safe, comfortable, very non-scary songs, unlike those that Prince wrote.

It’s really the music and the musical performances in the film that make this worth watching.  The acting wasn’t anything to write home about, but that’s not surprising considering most of the cast were non-professional actors.  This movie does show how a person can become an overnight sex symbol and star from a single very popular film, though.  Just like John Travolta became everything for a while after Saturday Night Fever, so too did Prince after Purple Rain.  You may want to watch this film to see just what all the screaming was about.  For everyone else, if this movie sounds interesting then I recommend you give it a try.