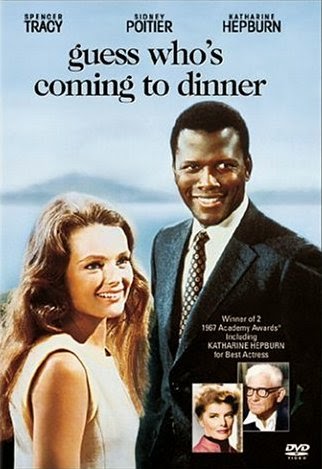 Guess Who’s Coming to Dinner features three screen legends – Spencer Tracy, Katherine Hepburn, and Sidney Poitier.  As a result, the fourth main member of the cast – Katherine Houghton – ends up getting overshadowed.  This film earned 10 Oscar nominations, including Best Picture, and won for Best Actress (Hepburn) and Best Original Screenplay.  This was Spencer Tracy’s very last movie and he received a nomination for Best Actor.  He died just 17 days after filming was complete.  He does a great job in the movie of playing a man who has just come face to face with his own hypocrisy.


Matt and Christina Drayton (Tracy and Hepburn) are upper class white liberals who have intentionally raised their daughter Joey (Houghton) to be racially colorblind.  Joey is now a young woman and while on vacation in meets Dr. John Prentice (Poitier), a black man.  The two immediately fall in love and get engaged.  They are traveling to the Drayton’s home to tell Joey’s parents when the movie opens.  For 1967 this was intentionally provocative subject matter.  The two are shown kissing, which I believe is a first for an American movie, but we only see it in the rear-view mirror of the taxi they are in.

When Matt and Christina meet their daughter’s fiancée they are stunned.  Christina adjusts to it better than Matt.  He immediately gets on the phone to research just who the hell this black man is that wants to marry his daughter.  While waiting for an answer he rhetorically asks his wife what their daughter is doing.  Christina responds that Joey’s doing just what the two of them taught her to do – to think for herself and to not limit herself in love just because of the color of someone’s skin.  Matt has some uncomfortable moments in the film because everything he thought he believed in has now been revealed to be wishful thinking on his part.  He’s fooled himself into thinking that he’s so open minded and it’s a shock to him when he finds out he’s not.

We also get to meet John’s parents (Roy Glenn and Oscar-nominee Beah Richards).  In a realistic and balancing move we discover that his parents are none too happy about the prospect of the two marrying either.  As the father tells John, what they are doing would make them criminals in some states.  (Right around the time this film was made the U.S. Supreme Court finally struck down all anti-miscegenation laws as unconstitutional.)

The weakest part of this film is the lengths they go to ensuring that no one can possibly have any objection to Dr. John Prentice as a man, a husband, and a human being.  At one point Matt exclaims in frustration at not being able to find anything wrong with him, “He’s a goddamn saint!”  I had the same reaction, but more in the “give me a break” sense.  I suppose at the time they felt they had to do that, but nowadays it comes off as overkill.

I mentioned at the top that this was Spencer Tracy’s last movie.  He was so ill during filming that they had to shoot his scenes in the mornings and Hepburn would take him home in the afternoons when he got too tired to continue.  Both she and director Stanley Kramer had to put their salaries in escrow until the movie was done because the studio didn’t want to commit to making the film with .  They were afraid he would die and they would be out a lot of money.  did complete his role, but he never got to see the finished movie.  Reportedly Hepburn never watched it either because it was too painful for her.  (She and Tracy had been lovers for many years.)
Surprisingly, despite having a stellar year in 1967 – this film, Best Picture winner In the Heat of the Night, and personal favorite To Sir, with Love – Poitier did not receive an Oscar nomination for any of them.  He had already won one previously for Best Actor in Lilies of the Field (1963), and had been nominated even earlier for The Defiant Ones (1958), so I don’t think his race played much of a factor in not getting nominated.

Despite the central topic in the film this movie proved to be quite popular.  In addition to all the Oscar recognition, general audiences also went to see it in big numbers.  This even included people in the southern states.  Studios had avoided opening films in the South if they had major black characters in them, but Guess Who’s Coming to Dinner finally showed that that fear was misguided.

The topic isn’t that big a taboo nowadays, so the main reasons to see this movie today are its place in history and the acting performances within it.  The story gets a little heavy handed with how virtuous Poitier’s character is, but not enough to tell people to avoid it.  If this film sounds interesting then I recommend you give it a try.