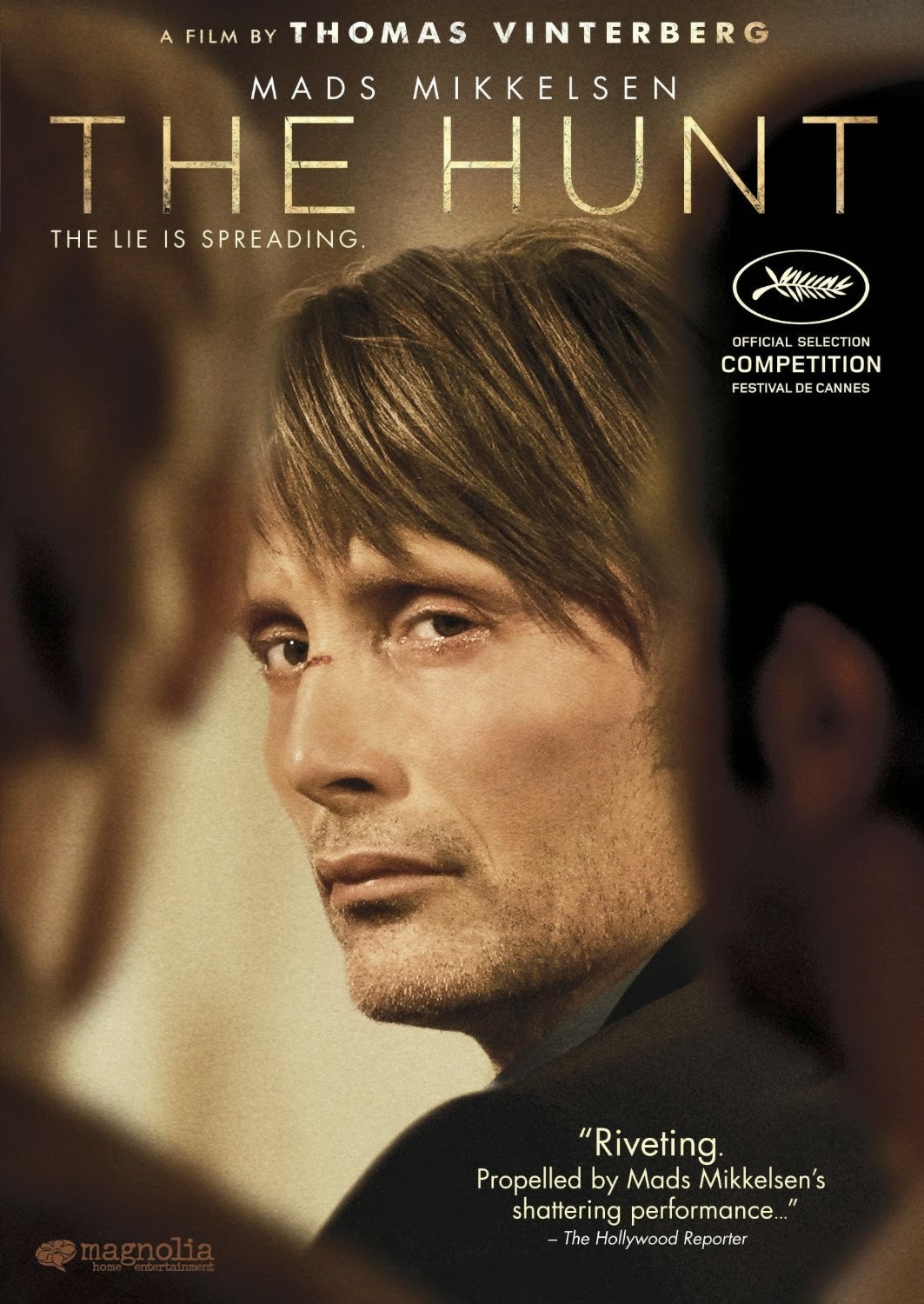 The Danish film The Hunt, nominated this year for the Best Foreign Language Film Oscar, is a true horror movie.  Please don’t mistake this for the generic organs and entrails monthly release from , though.  Those kinds of films are about body trauma and gross outs.  They stopped trying to be scary a long time ago.  No, The Hunt is a horror film that is truly frightening because it is so real.  It shows just how easily a good man’s life can be destroyed from the modern day witch hunt that follows an accusation of child molestation.  And it is so scary because it happens far too often in real life.


Mads Mikkelsen (Casino Royale) stars as Lucas, a divorced teacher.  His wife has custody of his son and is resisting allowing her son to come visit his father.  When the movie starts that’s the only real conflict in Lucas’ life.  He’s a beloved teacher.  He’s best friends with Theo, the man next door.  Theo’s wife and five year old daughter Klara like him, too, and Lucas teaches Klara at school.  He even watches out and protects her when she wanders away from her unobservant parents.

Klara likes him so much she tries to do something special for him.  She makes a heart and gives it to him.  She also kisses him on the lips.  Lucas gently tells her that it’s not right for her to do that and that he can’t accept her gift that she made.  She’s too young to understand and she gets angry at him – the kind of anger that can consume a little kid for a brief time then they forget all about it.  Unfortunately, the principal of the school where Lucas teaches and Klara attends asks Klara what’s wrong.  She says she hates Lucas.  The principal asks why and Klara just repeats something the friend of her older brother said about a penis standing up.  Klara has no idea what it means; only that it is something naughty.

Understandably the principal is concerned.  She follows-up with Lucas, but without identifying what was said or who said it.  Just as understandably, Lucas is baffled.  Unfortunately, the principal proceeds to screw up pretty much everything from that point on.  She brings in what appears to be just a random man she knows to quiz Klara.  He’s obviously not a professional because he asks leading questions and won’t let Klara go out and enjoy recess until she tells him what he wants to hear, which is how Lucas molested her.  Even though Klara says nothing, the principal takes it upon herself to announce to every parent that Lucas has been accused – before there is even an investigation of any kind, let alone a trial.  The principal even calls Lucas’ ex-wife to tell her not to let their son come visit Lucas.

The witch hunt rapidly escalates.  Kids being kids, others are soon making up wild stories about Lucas so that they can get attention, too.  Soon the entire town is actively hostile to Lucas.  His girlfriend starts to doubt him.  Even his best friend, Klara’s father, doesn’t believe he is innocent.  Only Lucas’ son, who runs away from the ex-wife, stands by him.  Lucas can’t even go to buy groceries anymore because he gets beaten up by the men who work there.  His son goes and they even threaten the son, just for being related to Lucas.

Once she understands that bad things are happening to Lucas Klara tries to tell her parents and her principal that she made it all up; that Lucas didn’t do anything bad to her.  All the adults are so wound up with righteous anger that they ignore her, telling her that the trauma was so horrible that she’s blocked it out now and that’s why she thinks nothing happened.

How can Lucas possibly prove his innocence? (Unlike Director Thomas Vinterburg’s 1998 film The Celebration this movie makes it plainly clear that he is innocent.)  And here is the truly horrific part: even if he can prove he didn’t do this his life is still ruined.  There will always be people who will believe the very worst of him.  Mikkelsen gives a great performance as a man trying to deal with this horror that has come down upon him.  He’s won several awards for Best Actor for this film, including at , but the Academy didn’t nominate him for the Oscar.  I think he deserved at least a nomination.

And paralleling the scariness of the film, I’ve seen multiple comments about how “unrealistic” this movie is because of course there would be a proper investigation and he would have quickly been found innocent.  They go on to say that only a guilty person would ever need to fear something like this happening.  I wish the world was that cautious with the lives of the innocent, but it is not.  Just look at the many cases of child care operators being accused of child molestation who have had their lives ruined over claims that eventually ended up being untrue.  And in at least one of those cases the investigators asked even more leading questions than the ones in this film.  And there have unfortunately been enough wives that have used it as a tactic during a divorce to get sole custody of the kids that psychologists have been able to build a profile of the women that may be likely to stoop to those depths.  Here’s why it continues to happen now and then: it works.  Even with zero proof the father will very likely never be able to be alone with his kids again.

Don’t get me wrong; there are who knows how many children that do suffer at the hands of adults.  Unfortunately, sometimes the life that gets destroyed is not an innocent child’s but that of an innocent adult.  And no, I don’t feel that that’s an acceptable price to pay on the off chance that a child truly is being harmed.  And no, I don’t feel this strongly about it because I have ever been accused.  What happened to Lucas could just as easily happen to me, or any other person, though.  All it takes is a child that is angry with you and the wrong words said at the wrong time and every one of us would find ourselves in exactly the same situation as Lucas.

So, which is scarier: a real world horror story that could happen to anyone, no matter how good or beloved they are, or some supernatural force eviscerating teenagers?  If you want to watch a real horror story then I highly recommend you see The Hunt.