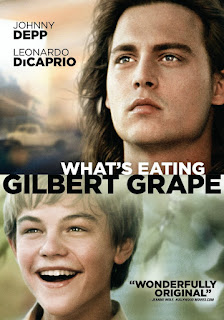 What with the subject matter in the movie, and with the word “grape” right in the title, it’s impossible not to use the word “bittersweet” to describe the film What’s Eating Gilbert Grape.  Johnny Depp is the star and he was already a household name when the movie was made.  Also in the film, and someone who I had never heard of before I saw it, is Leonardo DiCaprio.  He plays a mentally retarded younger brother of Gilbert’s.  Because I knew nothing about DiCaprio, and because he did such a good job in the role, I honestly wondered if the young man they got to play the role really did have that condition.  I must not have been the only one who was impressed because DiCaprio received an Oscar nomination for his performance.  He didn’t win, though. Those of you who saw the film Tropic Thunder know why.

Writer Peter Hedges adapted his own novel about a young man named Gilbert Grape who has numerous sources of both joy and frustration in his life.  Gilbert and his family live in a small town in .  Gilbert’s father died several years before and his mother (Darlene Cates) never got over it.  She has become extremely obese and has not left the house for years.  Gilbert has basically taken over the care of his entire family.  That includes his sister Amy (Laura Harrington), his brother Arnie (DiCaprio), and his youngest sister Ellen (Mary Kate Schellhardt).  Arnie is a handful.  He is a danger to himself, especially from his obsession with climbing the water tower in town.

In addition to his family, Gilbert also has issues dealing with an ongoing affair he is having with a married woman (Mary Steenburgen), and with the fact that a large store chain has come to town and the small grocer Gilbert works for might be put out of business.  Thrown into this mix is Becky (Juliette Lewis), a young tourist who has become stranded in town when her family’s camper broke down.  Gilbert does have a couple of friends played by John C. Riley and Crispin Glover.

Gilbert is an outwardly calm person.  In fact, I’ve read some comments on this film that Depp was boring for much of it, but Hallstrom has said that he and Depp both felt this was the right way to go with the character.  I don’t agree that he was boring, since you know it is all building towards something.  With all these things going on even someone as seemingly calm as Gilbert will reach a breaking point.

As I wrote up top DiCaprio was very convincing in his performance.  I consider it the best work he has done so far and he was only 17 when he made this movie.  I also want to mention Darlene Cates, who played the mother.  She had never acted before.  The filmmakers needed to find a woman who was very heavy to play the part.  They happened to hear about Cates, who for a time had been depressed and not left her house for years.  That was exactly the same kind of situation the mother is in in this film, so they contacted her.  Luckily she was game for it, she obviously understood the character, and she was able to hold her own with the others.  (She has since become a speaker on subjects related to obesity and self-esteem.)

She did have some concerns about how her character (and by extension herself) were going to be presented in the film, but once she talked to the author, who had based this mother on a woman he knew, and once she found out it wasn’t just a “let’s make fun of the fat person” role, she felt better about it.

What’s Eating Gilbert Grape is a different kind of film.  It has some funny moments, but it is not a comedy.  It has some sad moments, but it is not heart-wrenching.  It’s small, but it has an incredible cast in it.  It has Depp’s character in relationships with two different women, but it’s not a romantic comedy.  What it is is a film with a good story and good performances.  If this sounds interesting then I recommend you give it a try.

Note: the video below contains clips of Leonardo DiCaprio in What’s Eating Gilbert Grape.  The scenes do not have any real context to them so they should not be spoilers.