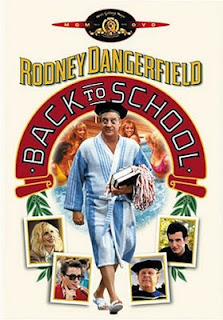 Back to School was a comedy vehicle for Rodney Dangerfield.  He had been doing standup for years, but his appearance in 1980’s Caddyshack had made him known to a whole new generation of people.  He also became almost ubiquitous in advertisements for Miller Lite beer in the early 80s.  By the time this film came out he was a full-fledged star.  Not a star yet, but one that soon would be, was Robert Downey, Jr.  He plays a prominent supporting role in this film.  It was the first time I ever saw him in a movie.

Rodney Dangerfield plays Thornton Melon, a businessman and self-made millionaire.  His son Jason (Keith Gordon) is headed off to college, but is worried his son doesn’t have what it takes to survive.  He decides the best way to help his son is to attend college with him.  This would normally be a problem since never even got a high school diploma, but one hefty donation to the Dean (Ned Beatty) for a Melon School of Business and matriculates with his son.

Jason is going to be rooming with Derek (Robert Downey, Jr.), but has again arranged things.  Their adjoining rooms have all been remodeled to an immense single room that just screams “party central”.  In fact, hires Oingo Boingo to play a party.  People of my generation know who they are.  People who are younger will know one of their members – Danny Elfman – as a multiple Oscar nominee who has scored dozens of films, including just every Tim Burton movie ever made.  Others might know him as the man who wrote The Simpsons’ theme.  Speaking of music, this film also has a song by Michael Bolton when he was a metal singer (really.)  Related to this party is both an inside joke and an early example of product placement.  brings in truckloads of Miller Lite beer for the party.  At the time it got a big laugh from the audience I saw this with.  Nowadays the joke has been lost.

has issues with his business professor (Paxton Whitehead), who knows nothing about how to run a business in the real world, but thinks he is far better than someone of ’s background.  Making matters worse, this professor is romancing ’s English professor (Sally Kellerman), who fancies now that he has just gotten a divorce from his gold-digging second wife (Adrienne Barbeau).  He has his chauffeur (Burt Young) run interference for him sometimes.

Meanwhile Jason and Derek have been getting to know others.  A young woman named Valerie (a pre-Star Trek Terry Farrell) catches Jason’s eye.  She has also caught the eye of Chas (William Zabka).  Back in the mid 80s if you needed a bad guy in a teen film, Zabka was your man.  From beating up Daniel-san in The Karate Kid (1984), to terrorizing the school in Just One of the Guys (1985), to being a jerk in this film, no one was better.  In fact, when the filmmakers who made Hot Tub Time Machine (2010), a movie about traveling back to the 80s, needed someone to be a jerk they very fittingly went out and got Zabka for the cameo.

It’s not bad enough that Chas is competing with Jason for Valerie; he is also the champion diver at the school – the sport that Jason is also going out for.  was a champion himself in his younger days, and Jason is trying to live up to his father’s legacy.  Will ’s patented Triple Lindy dive make an appearance?  (I’ve seen other movies and TV shows use the term “triple lindy” as a reference back to this film.)  Jason’s life is made even harder when his father turns out to be a lot more popular on campus than he is.

As you might expect, doesn’t do well in his classes.  (Watch for an early appearance by Sam Kinison as a professor).  At one point he has a paper due on Kurt Vonnegut and there is no way he is going to be able to complete it.  There’s a knock on the door and it’s Kurt Vonnegut himself whom has hired to write the paper.  In one of my favorite jokes, the professor rejects the paper because it’s clear it’s not ’s work and “whoever wrote that did not know the first thing about Kurt Vonnegut.”  To me that just says everything about people who earn money making up all kinds of crazy theories about what writers, artists, and filmmakers really meant when they did something, rather than the completely obvious and straightforward interpretation.

’s lack of work comes back to bite him.  He has to take an oral exam from each of his professors to prove that he has learned their subjects.  Seeing Rodney Dangerfield reciting Dylan Thomas’ poem ‘Do not go gentle into that good night’ is worth the price of admission all by itself.  “Rage, rage against the dying of the light!”

, Jr. plays the loud mouth, smart aleck, outrageous friend to perfection.  In some ways his character is not that different from his most famous character now – Tony Stark.  You could almost picture , Jr.’s character of Derek as how Stark was when he went to college.

This film was probably the pinnacle of Dangerfield’s movie career.  Keith Gordon didn’t stay with acting much longer.  He moved into directing.  Among the films he did were Mother Night (1996) based on a Vonnegut novel, and The Singing Detective (2003) where he directed his former co-star Robert Downey, Jr.  As I mentioned up above, Terry Farrell would go on to do Star Trek: Deep Space Nine.  Watch for another future Star Trek alum in Back to School – Robert Picardo.

Back to School is filled with lots of jokes, some of them raunchy.   Because it has little to no violence in it, it has a PG-13 rating, which is fair.  (The MPAA hadn’t gone insane yet.)  If you share the MPAA’s current opinion that a quick flash of boob will scar your child for life, though, then you will not want to watch this movie with them.  For everyone else, if this sounds interesting then I recommend you give it a try.

Note: the video below contains a clip of Robert Downey, Jr. in Back to School.  It’s not a spoiler.  It’s not exactly an Oscar-worthy performance, either, but it’s the only clip I could find where you could see what he looked like in the film.