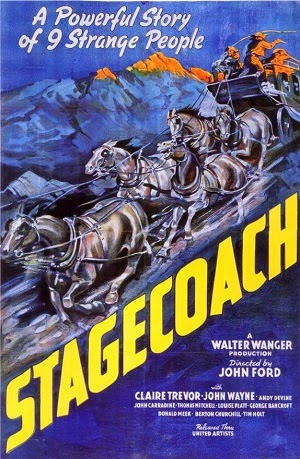 Stagecoach was the first of many collaborations between director John Ford and actor John Wayne.  It was very influential both in presentation and plot.  The concept of having a group of people in a hostile situation, some of them with secrets, has been used many times since, in almost every setting.  There’s an adage that says that a villain is the hero of his own story.  Well, the travelers aren’t really villains, but what Stagecoach gets right is that each of them is the lead of their own story.  They just happen to come together on a stagecoach that is traversing hostile territory.


Nowadays, John Wayne is far and away the most famous name in the cast.  At the time he was trying to get it made, though, Ford couldn’t find anyone willing to fund a big budget western with “B” movie actor Wayne as the star.  Ford finally settled for independent financing at a far lower sum than he wanted.  Actress Claire Trevor, a much bigger name at the time, received top billing.

Here’s the thing: John Ford was right that this was the perfect role for John Wayne.  Once the film came out became a big star…after having been in more than 80 films prior to Stagecoach.  And these were not 80+ big films, either.  They included such “gems” as Randy Rides Alone (1935), Texas Terror (1935), and The Lawless Nineties (1936).

Nowadays the most well known movie Wayne did prior to Stagecoach is probably 1933’s Baby Face where he had a small role as one of the men star Barbara Stanwyck’s character uses on her social climb to the top of a business’ male leadership.  I didn’t even recognize him at first.  It took his second brief appearance before I even realized “Hey, that’s John Wayne.”  He might have 5 minutes of screen time.

What made him a star in Stagecoach is that he got to play an anti-hero: the Ringo Kid.  He is out to get revenge for the death of his father and brother, and murder is most definitely his plan when he catches up to the men who did it.  He also gets his own entrance after we have heard about him multiple times from other characters, so there is build up and anticipation for when we finally see him.

The plot of the film is deceptively simple – a stagecoach ride across hostile territory – but what fleshes it out are the characters.  Many are well known archetypes (some might even call them clichéd now), but that helps people get to know them very quickly and get into the story quicker.

The stagecoach is going to be traveling from to .  Apache chief Geronimo has been causing havoc in the area, but each of the travelers has their own reasons for taking the risk.  The travelers include: a prostitute named Dallas (Claire Trevor), who is being driven out of town by the self-righteous citizens; Doc Boone (Thomas Mitchell), a doctor who is a drunk and who served the Union during the Civil War; a young pregnant woman who is trying to get to her U.S. Cavalry husband; a banker who has stolen $50,000 from his own bank; a Southern gambler who served the Confederacy during the Civil War; a Marshall providing protection from the Indians; and others.

If you think that the pregnant woman will have to give birth, her military husband will be involved in fighting Indians, Geronimo will cause trouble, the two men who fought on opposite sides of the Civil War will have words, the two women will not get along because of their vastly different social standings, the prostitute will have a romance with someone who doesn’t know what she does for a living, and the Marshall will encounter the Ringo Kid, then you will not be mistaken.  All that and more happens in just a little over an hour and a half.

In a year of great films Stagecoach received seven Oscar nominations, including Best Picture and Best Director.  It won two Oscars, including Best Supporting Actor for Thomas Mitchell as Doc Boone.  That alone would make for a great year for an actor, but Mitchell went even further.  That same year that he won for Stagecoach he also had roles in Only Angels Have Wings, The Hunchback of Notre Dame, Gone with the Wind, and Mr. Smith Goes to .  Today he may be best known as the absent minded Uncle Billy in 1946’s It’s a Wonderful Life.

I mentioned at the top that this was the first of many collaborations between Ford and Wayne.  This was also the first of many films Ford would shoot in – a look for westerns that became very famous because of that.  The legend has it that a man local to kept lobbying Ford to film there and finally convinced him after sending him tons of photos of the natural monuments.  In Stagecoach the people actually travel through three times during the course of the film.

Stagecoach is worth watching just to see John Wayne become a star right before your eyes.  It also has other interesting characters and some good action scenes.  And the black and white cinematography was made to show at its best.  If any of this sounds interesting then I recommend you give this film a try.