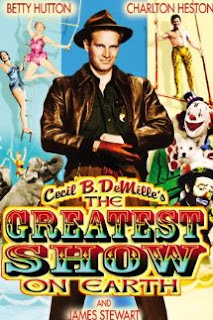 
It’s interesting to note that the contemporary reviews for it were almost universally positive.  And in addition to critics liking it back then it was also a big box office success.  It made Charlton Heston a star overnight.  It’s in the much more cynical era today that the overlapping love entanglements, the spectacle, and the sheer earnestness of it alienate some viewers.  I went into this with very low expectations and came out surprised that not only did I not hate it, I was entertained by it.  I agree that it’s not Best Picture worthy, but it is far from being a bad movie.

Producer/director DeMille wanted to set a movie amongst the spectacle and pageantry of the circus.  Who better at the time to approach than Ringling Brothers – the kings of the business and the owners of the phrase “the greatest show on Earth”?  Filming was done at Ringling Brothers’ properties and several of the show’s stars have small roles in this film, most famously clown Emmett Kelly.

DeMille made his stars really learn to perform the stunts for their characters.  Trapeze artists Betty Hutton (as Holly) and Cornel Wilde (as The Great Sebastian) really learned their trapeze tricks.  Wilde even tore some ligaments catching Hutton in one of the scenes and had to take several days to heal enough to continue filming.  Gloria Grahame (as Angel) really did perform with an elephant, including having it bring its foot down on her head while she lay on the ground.  Having to do this is one of the reasons first choice Lucille Ball turned down the Angel role: she had learned she was pregnant.

Heston was not the obvious first choice for circus manager Brad Braden.  He had only acted in a couple of films before.  In fact, he liked to relate an anecdote where someone said that they liked how well that circus manager performed onscreen with the real actors.  He said it was the best review he ever received.

Braden has to contend with a number of issues.  The circus is losing money and the investors want to shut it down.  Braden gets an agreement that they can keep it open as long as it makes money.  To do that he hires big star The Great Sebastian, which means pushing his girlfriend Holly out of the starring role on the trapeze.  This alienates Holly, and combined with Sebastian’s killer way with the ladies, he’s soon romancing her.  The two of them keep escalating the difficulty of their stunts, too, in an effort to one up each other.  You know that’s not going to end well.

Since Holly is no longer with Brad, Angel steps in.  This angers a man who likes her.  Brad also has to contend with a thief on the midway.  One man he seemingly doesn’t have to worry about is the clown Buttons.  He does his job and seems friendly with everyone.  Wait a minute, why is Buttons receiving an ominous message from a woman in the audience?  And why doesn’t he ever take his makeup off, even when he’s not performing?

Pretty much everyone will recognize the voice of Jimmy Stewart behind the greasepaint, but back when the film was made the producers didn’t think that would happen.  They made Stewart take lower pay since they thought no one would know he was in the movie.  He’d always wanted to play a clown, though, so he did the film anyway.

There are a number of fun cameos in the film, especially when Dorothy Lamour is performing.  Watch for her “Road” partners Bob Hope and Bing Crosby in the audience during her singing.

Everything comes to a head when the thief and Angel’s spurned paramour decide to sabotage the circus to get back at Brad.  There is a spectacular train crash that impresses even today.  It was done with exquisitely built models that even crumpled the way the real train cars would have.

It looks like this is the end for the circus.  How can they possibly recover from this?  With “can do” attitude, it turns out, which I’m sure makes jaded people gag.  In addition to Best Picture it also won Best Writing – just another sign of how times have changed when it comes to being considered what is and is not a good story.

Some people claim, and perhaps rightly so, that this only won Best Picture over High Noon because of politics regarding the McCarthy hearings and how High Noon’s producers were under investigation, while DeMille was a McCarthy supporter.  If so, I am shocked, shocked! to find politics going on in the picking of Oscar winners.

Some also feel that this was a “career Oscar” for DeMille who had been such a big part of building the legend.  There have been many examples of this both before and since.  What goes around comes around, though.  DeMille probably should have won Best Picture in 1957 for The Ten Commandments (1956), but he lost out to Around the World in 80 Days (1956) – another of the winners that usually makes the “ten least deserving” lists.

I think that if you approach The Greatest Show on Earth not as a “Best Picture winner”, but as just another movie you may find yourself being entertained by the spectacle of it all.  However, if you can’t get past the idea that Best Picture winners should live up to certain standards then you are better off skipping this one.  For everyone else, if this sounds interesting then I recommend you give it a try.