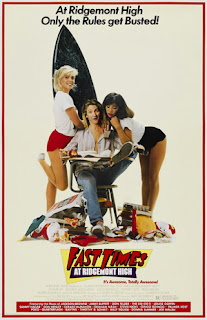 In the fall of 1982 I was a barely 18 year old incoming college Freshman.  The very first night all the students were there the drug dealer on our floor gathered all of us together in his room.  We shot the shit for a while then he whipped out some pot.  He’d let us smoke that night for free.  (All part of creating a market for his product – this was a business school after all).  None of us were brave enough to be the first to get up and walk out, but only one of us was weak enough to smoke his pot.  With his lack of success the dealer started badgering us all the next day about another party.  This time we knew it would be more of a hard sell and a bunch of us wanted no part of it.  We decided to get off campus that evening and in this small town about the only thing we could agree on was to see a movie.  Only one of us had a car so seven guys all piled into it.  The car could comfortably hold two and realistically hold four, but we made it there and back, although probably not legally.  The movie we decided to see was one none of us had heard of, but that looked like fun: Fast Times at Ridgemont High.  It was HUGE.  We talked about it all the way home and were still quoting it weeks later.

Although we didn’t know it at the time this movie about the ups and downs of a bunch of students across an entire school year had what may be the best collection of young, future talent ever assembled in one film.  Many went on to big careers in the 1980s and some of them are still household names today.  There were even three future Best Actor Oscar winners in the cast – Sean Penn, Forrest Whitaker, and Nicolas Cage.  And the fact that Jennifer Jason Leigh has never even been nominated for an Oscar is surprising to me.  The talent behind the camera was also impressive with Amy Heckerling directing the film from the screenplay that Cameron Crowe adapted from his own book.

Before getting into movie making Crowe was famously a very young reporter for Rolling Stone Magazine.  (His 2000 movie Almost Famous is more than a little autobiographical).  In the late 1970s he still looked young enough to pass for a high school student so he spent some months “undercover” observing how the students interacted.  This formed the basis for an article, then a much expanded book.  It caused some controversy with the frank sexuality in it, but that was from people that were in denial that teenagers are sexual beings.

The movie was not without its own controversy.  It was originally rated X (the NC-17 rating not yet having been created) because of a full frontal nude scene from one of the actors in cast.  As the MPAA knew, even a quick glimpse of a penis in a movie would turn teenagers into a pack of ravaging sex maniacs so they had to ensure that they protected the country from this.  Heckerling cut the male nudity and the film got released with an R rating…and with perhaps the most famous topless scene in movie history still in it.

Phoebe Cates plays Linda, the more experienced one of two close friends (the other being Stacy, played by Jennifer Jason Leigh.)  Stacy’s older brother Brad is played by Judge Reinhold.  Brad has a horrible day at his after school job, comes home to find Linda and Stacy in the pool, and heads into the bathroom for a little quality time.  We then see his fantasy of Linda emerging from the pool in slow motion, taking off her top, then kissing him, all accompanied by The Cars’ song Moving in Stereo.

It cannot be overstated how big an impact this scene had on guys my age (and most men in general, quite frankly).  This was long before the internet.  Seeing a woman that incredibly beautiful do something like this was something that had never been experienced by this barely 18 year old man, nor by any other guys my age.  Phoebe Cates single handedly ushered an entire generation of boys over the threshold into manhood.  When the movie rental boom took off a few years later this movie was literally the one whose tapes had to be replaced the most.  More than any other movie this one broke the most and almost always in the same place: this scene.  People rewound and played that scene so many times that the tapes simply tore apart in the housing.

After Phoebe Cates the person who emerged from this film with the highest profile was Sean Penn, who played stoner Jeff Spicoli.  Many of the most famous lines from the movie were uttered by his character.  If you listen to the DVD commentary track from Heckerling and Crowe it is nothing but a Sean Penn love fest.  They barely mention any of the other actors and actresses in the film.  And they also do something I have never seen in any other commentary: when the credits end and the screen goes black they continue talking.  I don’t mean they finish their last thought and say goodbye.  I mean that they spend a good ten more minutes just continuing to discuss the movie while there is nothing but a blank screen.

In addition to Cates, Leigh, Reinhold, and Penn this film also features the first film appearance of Nicolas Cage (then going by his real name of Nicolas Coppola).  It’s a “blink and you’ll miss him” appearance in the theatrical version, although TV versions would insert deleted scenes with him in them once he became famous.  Other familiar faces include the aforementioned Forrest Whitaker as a star football player (see the clip below); Eric Stoltz and Anthony Edwards as stoner buddies of Spicoli; cult actress Kelli Maroney (see my review of Night of the Comet here) playing, what else, a cheerleader; and future first ever victim of Freddie Krueger: Amanda Wyss.

Not everyone went on to bigger stardom.  This film had the best known roles for two of its major characters: Brian Backer, who played the guy too shy to hook up with Jennifer Jason Leigh’s character, and Robert Romanus who was the local ticket scalper who actually does hook up with her.  It was his penis that the MPAA protected the youth of from seeing.  Leigh’s nudity stayed in the film, though.  She usually gets overshadowed by the famous Phoebe Cates scene, but she was actually the more daring actress of the two in this film.

It’s not all about the kids, though.  Perhaps third in popularity overall behind Cates and Penn is Ray Walston, who played Mr. Hand, the teacher who had several run-ins with Spicoli.  This movie revived his career.  Another memorable adult role was Vincent Schiavelli as a teacher who takes his class to watch a cadaver being autopsied.

With Cameron Crowe involved you know there’s going to be music and lots of it.  The soundtrack is a who’s who of musical acts at the time.  Songs like Jackson Browne’s Somebody’s Baby and Tom Petty’s American Girl became big hits.  There are numerous references to then-current music trends in the film, including girls trying to look like Pat Benatar.  Pamela Springsteen, sister of Bruce, appears in the film.  And there is also a cameo by Nancy Wilson of the band Heart.  She plays the woman who laughs at Reinhold’s character in a pirate hat.  A few years later she would marry Crowe.

One minor thing that bugged me even when I saw the film the first time, and something that I can’t imagine Crowe getting wrong, is the emphasis that the absolute best music to play when you are cruising with a girl is “side one of Led Zeppelin IV”, yet the movie has the Zeppelin song Kashmir playing during these scenes.  ’s not even on that entire album, let alone the first side of it.  My guess is that in post-production Zeppelin would not allow whatever song Heckerling wanted to play, but they let her use instead.

I mentioned at the top that this film was huge.  Showing that studios of whatever era are often wrong in predicting what movies would be hits vs. bombs there was talk of not even opening this film on the entire east coast and just letting it spend a week in some west coast theaters.  And there was no direct to video market then so this would have meant the film would have just disappeared.  They finally decided to release it in less than 500 theaters and in the middle of August.  The movie went on to make six times its entire production budget just in first run ticket sales and another four times its budget in VHS rentals.

While you can certainly say that this movie is a product of its time, and some jokes will be lost on teens today (like all the students sniffing the mimeographed papers as they pass them back in class), I think that all teenagers can still relate to at least some of the characters.  And this movie is not just for teens.  Anyone my age will probably remember how fun this film was, and people who can still remember what they were like as teens will recognize either themselves or their friends in this movie.  Unless you only watch depressing movies, I highly recommend this film.


Note: Some of you were probably hoping for the Phoebe Cates scene, but instead the video below contains a clip of Forrest Whitaker.  Spicoli accidentally trashed Whitaker’s car, but they make it look like the rival high school did it just before the big football game.  Let’s just say that Whitaker’s character is more than a little motivated for the game.  Just a note for those disappointed by not seeing Cates: watch her 1982 film .  Trust me.