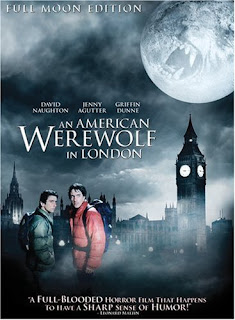 As a genre, horror movies don’t do much for me.  They have to be really outstanding for me to recommend them to others.  One of the things I do like is the occasional horror movie that mixes comedy into it.  This is probably because I am a fan of dark comedy.  An American Werewolf in is one of those films.  It takes the overused concept of the werewolf movie and turns it on its ear.  The movie still contains plenty of gore for the people who watch horror movies for that, though.

Almost the entire cast and crew of this film were citizens.  Only writer/director John Landis (Animal House, Blues Brothers), makeup artist Rick Baker, and the two stars – David Naughton and Griffin Dunne – were American.  The entire film was shot in the , too.  Even with all this, the government still objected to Landis using too many Americans.  They finally approved the filming after he threatened to move all the work to .  (A sequel was eventually done that was set in , but I have not seen it.)

David Kessler (Naughton – most famous prior to this for his "I'm a Pepper" Dr. Pepper commercial) and Jack Goodman (Dunne – After Hours) are backpacking around .  They end up in an unfriendly pub in a small town on the moors.  There’s a full moon out.  They don’t stay long in the pub and head out.  They get attacked on the moors by a werewolf.  David wakes up in a hospital to find that Jack died from the attack.  There’s one big problem, though – Jack keeps appearing to David as a corpse telling him that he’s going to turn into a werewolf in one month’s time.  The only solution is to kill himself before that happens.  Needless to say, David thinks he is going insane.

While in the hospital David starts a relationship with a nurse (Jenny Agutter – ’s Run).  When he has recovered from his injuries he moves in with her.  Jack keeps appearing to him, though, each time in a more advanced state of decay.  He’s still the old Jack – kind of encouraging and upbeat – but what he’s trying to encourage is suicide.  David starts to wonder if this is all true, and as the full moon approaches he starts looking for signs he is changing.  He checks his teeth in the mirror.  He gets bothered when a little dog barks hysterically at him.  The soundtrack starts playing Bad Moon Rising.

When the transformation finally came, it was groundbreaking.  In fact, it was this film that finally forced the notoriously conservative AMPAS to add a Best Makeup category to the Academy Awards.  Rick Baker won the first award for this film.  He has been nominated 10 more times since for Best Makeup, winning six more times.  The transformation sequence goes on for minutes in the film.

That night David kills a few people, who also start to appear to him as corpses telling him he should kill himself before he changes again.  Before this, though, he had the worst “coyote ugly” moment a man could have when he wakes up in the wolf den of the London Zoo.  Apparently he “got some tail” while he was in wolf form.  Of course, he is completely naked, so he ends up comically trying to get out of the zoo without being noticed too much.

Another example of the humor in this film is that just about every song that is used has “Moon” in the title, including Van Morrison’s Moondance, Creedence Clearwater Revival’s Bad Moon Rising, and various versions of Blue Moon.  Landis tried to get Cat Steven’s song Moon Shadow, but Stevens had converted to Islam and didn’t want his non-Islamic music to be used.

And in case you were wondering, this film does not have any connection to Warren Zevon’s popular 1978 song Werewolves of London.  However, I’d be willing to bet money that the title of this film was directly influenced by it, and that the filmmakers must have wanted to use the song at some point.  (Note – The title is also possibly a reference to a 1935 horror movie titled Werewolf of London that was the first of its kind to come out of Hollywood.)

I’m one of those people who actually pays attention to the credits.  The first time I saw An American Werewolf in London I wondered if I had been mistaken because I thought I had seen a joke in the legal disclaimer.  I rewound it, played it again, and sure enough, the disclaimer says, “Any resemblance to any persons living, dead, or undead, is coincidental.”  Since then I’ve seen variations of this joke in other movies that involve supernatural creatures.  I can’t remember which movie it was, but I remember seeing a disclaimer, “No zombies were hurt during the making of this film.”  (It wasn’t Shaun of the Dead or Zombieland.  I just checked.)

If you are looking for one of the first movies that blended horror and comedy then you definitely need to see An American Werewolf in .  If you are squeamish, this movie does have some gore in it, so you may want to avoid it.  For everyone else, I recommend you give this film a try.