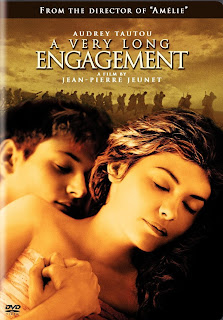 A Very Long Engagement re-teams director Jean-Pierre Jeunet with his Amelie leading lady Audrey Tautou.  While there are a few similar touches in both films, Amelie is more on the happy-fantasy side while A Very Long Engagement deals more with the realities of war and its aftermath.  That’s not to say that it is a dreary drama.  There are some touches of humor, such as the repeated arrival of a bike messenger.  If you don’t watch the film expecting “Amelie 2” then you should find it to be a very good movie.

While Amelie received a Best Foreign Language Film Oscar nomination, A Very Long Engagement did not.  The French government determined that even though it was written, directed, produced, and performed by French people, was set in France, was filmed in France, and was about France, that it was not French enough because Warner Brothers owned one of the production companies.  Not so coincidentally I’m sure, this also meant that the government could withhold the funds that they give filmmakers to support the French film industry.  This ruling meant that it also could not be ’s candidate for the Best Foreign Language Film Oscar.

Just to add insult to injury, the Cannes Film Festival organizers refused to allow the film to be shown there since it was first shown outside its country of origin – – even though the government had said it was not a French film.  In both cases I think the film was penalized for showing how badly the French government treated its soldiers during World War I.  The 1957 film Paths of Glory, which was far more damning on the same subject, was actually banned by the French government for many years.

A Very Long Engagement still received Oscar nominations for Cinematography and Art Direction, and it shows on the screen.  Most outdoor scenes of Tautou’s character seem to almost have a glow about them.  They are quite beautiful, in sharp contrast to the battleground scenes.  There is a also a scene with matches being lit then being blown out that is quite beautiful.

The film opens in 1916 with five soldiers condemned to death for injuring themselves in order to get out of the war.  Pay close attention to the short backstory that is told on each one.  Those will be very important as the film goes on.  One of those soldiers is Manech (Gaspard Ulliel).  We see in his backstory that he is a young man engaged to Mathilde (Audrey Tautou).  Even though there is a cease fire between the French and German trenches, French military law requires the commander (a cameo by Tcheky Karyo) to send the condemned men out of the trenches into no-man’s land between the two armies.  He knows this will rile up the Germans and fighting will break out again.  He has no choice, though.  This punishment is not intended to give the prisoners a chance; it is designed to be even crueler by perhaps making them die slowly from injuries, or even from freezing or starving to death.

The film then skips ahead four years to 1920.  Mathilde still lives with her parents (Jeunet regular Dominique Pinon plays her dad) and she does not believe that Manech is dead, even though he is listed as having been killed.  She says she would know inside if he was gone.  She has some money in a trust fund and she decides to use it to hire a detective to track down the men who last saw Manech alive.  The film then shifts back and forth between the war scenes and the Mathilde scenes as she starts to piece together the last several hours of Manech’s life up to him being declared dead.  This functions to create a pretty good mystery story.

Mathilde interacts with people from the other four soldiers’ backstories, so that is why it is important to pay close attention to them.  At one point Mathilde discovers that another woman (Marion Cotillard) is tracking down the officers who condemned her own man to this same fate.  She believes her man is alive, too.  The difference is, she is hunting down the officers to kill them.

In addition to Cotillard, another familiar face pops up in a small role – Jodie Foster.  She’s fluent in French and she wanted to work with Jeunet, so she accepted this small role in the movie.  Fans of Amelie will also recognize a couple of other faces such as the bad grocer from Amelie appearing as a priest in A Very Long Engagement.

Interspersed throughout the film are also some flashbacks to how Mathilde and Manech met as children and fell in love over the years as they grew up.  He was the only child who did not make fun of her for her limp.  She had had polio and was left somewhat disabled as a result.  The initials “MMM”, which stands for Manech aime (sounds like the letter M and means loves) Mathilde in the original French, and Manech marries Mathilde in the English subtitles, is important.  Watch for these initials at key points during the film.  In fact, my favorite moment of the film may be the sudden reveal of these letters on a chalkboard.

This film does not shy away from some of the horrors of war, but neither does it go out of its way to try to be gory.  Don’t avoid this film because of concerns about potentially graphic scenes.  Unless you hate foreign movies, I highly recommend this film.