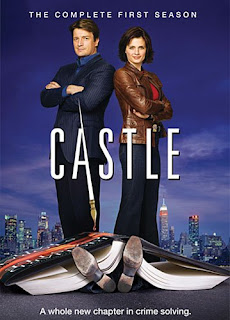 Castle debuted as a Spring replacement on ABC in March of 2009.  It only had time for a run of 10 episodes, but that was enough for ABC to see that it had something good.  They brought it back for a full 24 episode run the next Fall and that’s when the show really hit its stride.  It’s now in the midst of its third season.  It airs Mondays at 10:00 PM on ABC.
The premise is that a popular crime novelist ends up helping a police detective solve murder cases.  At the same time he is using these experiences with her as the basis for a new series of crime novels starring a character based on her.  There’s much more to it than that, but that is the 50,000 foot view.
The show is a light drama with comedy elements in it.  The humor comes from the wit and interaction of the characters, not from unrealistic scenes or events.  Even though they deal with murder cases, for the most part they do not get as graphic as most other crime shows on TV, which seem to have a contest to see who can show the grossest ways to kill someone.  Castle even tosses in some jokes about how unrealistic most TV cop shows are.
The thing that makes the show so entertaining is the chemistry that the characters have with each other.
Season 1:
The pilot episode did a great job of establishing the characters and the premise for the show going forward.  Detective Kate Beckett (Stana Katic) comes upon a murder scene where the victim is laid out in the same way as in one of the books by her favorite author Richard Castle (Nathan Fillion.)  As part of the investigation she brings him in to see if he knows anything about it.
We meet him at a party for the release of his latest book.  He is a very popular novelist, with no lack of female fans.  He’s single, rich, charming, and good looking.  He does have one major problem, though; he’s just killed off his most popular character in this latest book and he has writer’s block.  He can’t create anymore.
Beckett shows him the evidence and he recognizes the connection just like she did.  She also lets him know about a second murder that also was based on one of his books.  It’s then that he realizes she is a fan of his writing because only the most ardent fan read that obscure book of his.  She’s a little thrown, but she continues on.  He wants to stick around and learn more, but she sends him on his way.  When a third murder comes in, also based on one of his books, she has no choice but to include him.  They have a serial killer on the loose.
Castle quickly shows that he is no dummy.  Years of researching crime have made him pretty good at picking up clues and understanding what they mean.  He also has a creative way of thinking that Detective Beckett can’t help but be swayed by from time to time.
Once the case is solved, Detective Beckett thinks that’s it.  He had been flirting with her all along, while she kept it professional and rebuffed him.  Now that the case is over and she figures he is out of her life for good, she flirts with him a little bit just to torture him like he had been doing to her.  Guess what?  Castle is good friends with the mayor and he convinces him to let him continue to accompany Detective Beckett on cases.  He realizes he has found the perfect person to base his next series of novels on – her.  She is not happy about it, especially when she learns the name of the character – Nikki Heat.
The rest of the cast includes two male junior detectives that work for Beckett.  They have a great “buddy cop” vibe going.  There are also a medical examiner and the precinct captain who are recurring characters.  Other writers, real ones like James Patterson, Michael Connelly, and Stephen J. Cannell make cameos.  In Castle’s life he has his mother and daughter living with him.  His mother is an aging “grand dame” of the Broadway theater district.  His daughter is in her mid-teens and is the most mature one of the three.
I want to take a little time to expand on this.  One of the things that makes Castle more than just another detective show is the relationship of Castle’s character with his daughter.  He is a great dad and he has a strong relationship with her.  Most fathers are portrayed as idiots, abusers, emotionally absent, or anything else negative you can think of.  This show is one of the few that actually shows a positive father/daughter relationship and I would recommend the show on that alone.
As the season goes on Castle continues to crack jokes from time to time, but Beckett starts to get used to having him around.  There is, of course, an attraction between the two of them.  Beckett learns that Castle has some depth to him.  She is surprised that he is not cracking jokes on one case.  He responds, “I’m a wiseass, not a jackass.”  When she later sees his relationship with his daughter, that shows Beckett a whole new dimension to who this Richard Castle guy is.  He’s a lot more than this famous novelist she reads, and more than just the ladies man he came across as at the beginning.  In return Castle comes to respect and genuinely like Beckett and he wants to do something good for her.  He starts to independently research a cold case – the unsolved murder of her mother.
Book 1:
Click here to read about the Heat Wave book.


Season 2:
This season is the one where the show hit its stride.  The writers and actors know who the characters are and they are able to expand on them.  The show plays up the growing attraction of the two leads.  That really gets fun when Castle’s first Nikki Heat book is published.  It’s titled Heat Wave.  If you have not read the post on the book, please do so now.  The link to it is just above.
As you might expect, Beckett is not happy about the book.  She feels it is hard enough to be taken seriously as a detective and now she has to deal with this.  Everyone else around her, though, has a ball with it, especially her friend the medical examiner.  When Beckett complains, her friend says, “In his book Castle made you sound like a combination of Dirty Harry and Angelina Jolie.  What’s not to like?”  She also keeps pointing out that Castle wrote a pretty steamy sex scene between his character and Beckett’s in the book and that it can’t all be fictional.
As the season goes on, the sex scene in the book comes up a few more times.  They have a recurring joke where people who are meeting Castle and Beckett for the first time always assume they are a couple.  A couple of times when asked if they are in a relationship, the two of them simultaneously answer.  She says “No” and he says “Not yet.”
Not everything is jokes, though.  I figured the show would stretch out the back story of Beckett’s mother’s murder forever, but instead they actually have a more serious episode bringing things to a head.  In it Castle shows just how much he has come to care for her, too.
They also had a two-parter where a particularly brilliant criminal targets Detective Beckett because of Castle making her famous as Nikki Heat.
Season 2 ends on a bit of a down note, with Castle going away for the summer to work on his next book, and their feelings for each other still unspoken.
Book 2:


Click here to read about the Naked Heat book.
Season 3:
The show is currently in this season.  They have aired 17 of the 22 planned episodes.  The next new episode comes Monday, March 21st.
None of the detectives have heard from Castle for months.  They think he might still be out of town, but then walk past a bookstore display touting the release of Castle’s next book, Naked Heat.  They get a call that a body has been found.  They are the first cops on the scene, so they start to go through the apartment with guns drawn.  Guess who they discover is in the apartment with the body – Castle.
They bring him in, with him protesting his innocence the whole time.  Things were a little strained between him and all the other detectives with his separation and now this just makes things worse.  He eventually gets exonerated, but things are a little different for a while.
This season has continued to play up the sexual tension between the two leads.  In my opinion the writers have taken it just about as far as they can and they need to do something to move the relationship along.  If they stretch it out any longer they are going to start losing viewers.  They have had the characters kiss.  It started out as a cover – pretending to be a romantic couple to fool a guard – but the kiss stretched out much longer than was needed.  They have had both characters independently realize that they have feelings for the other, but they always put something in the way of each telling the other.
They did not make as big a deal of the publishing of the second book in the world of the show.  What they did allude to a few times was that the first book, Heat Wave, was going to get made into a movie.  All the characters say who they want to be cast as their analogues, except for Beckett.  She won’t play along with the others.  Karma happens when the actress who was selected to play Nikki Heat shows up at the precinct to shadow her.  At first she is flattered, but things start to get weird for her when the actress starts to almost become her.  The actress also decides that since the character of Jameson Rook was based on Castle himself, then to really understand the character of Nikki Heat she should have sex with Castle.  Needless to say, Beckett is not thrilled with that.
The writers have also done the same thing as last year by having a more serious two-parter get aired during the February sweeps.  While investigating a murder it leads to the discovery that a dirty bomb will soon be detonated in .  This brings the Department of Homeland Security on board to lead that investigation.  Castle uses an excuse to get his mother and daughter out of the city, but he stays with Beckett.
Conclusion:
This isn’t the kind of serial show like Lost where you would have to watch it from the beginning.  I think people would be able to pick it up by just watching the new episodes as they aired.  For a fuller enjoyment of the show, though, I highly recommend watching both the prior seasons, and reading the two books that have been published.

Seasons One and Two are available on DVD, although not on Blu-Ray.  Season 3 is available from Amazon in HD for 99 cents an episode.  Links for the books are at the ends of the posts on them.
Chip’s Rating: 4 out of 5 stars