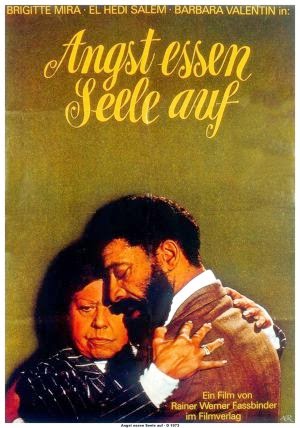 Despite the year and the title, Ali: Fear Eats the Soul has nothing to do with Muhammad Ali (in case you were wondering.)  It’s a German film from writer/director/producer Rainer Werner Fassbinder.  At the center of the movie is a marriage between a 60ish white German woman and a 30-something Arab immigrant.  The two meet by chance, get married almost by accident, and then receive the collective condemnation from almost everybody they know.  This film avoids most of the clichés about this either bringing them together or driving them apart.  Instead, what has a bigger impact on their relationship and marriage is that both seem lost at where they are at this point in their lives and neither really seems to know what they want.


One day Emmi (Brigitte Mira) ducks into a café to get out of the rain.  Everyone in there just stares at her.  She asks what the strange music is that’s playing and is told it’s Arab music.  At the prodding of his friend, a man named Ali (El Hedi ben ) asks her to dance.  No one else in the bar does anything except watch them.  Emmi asks Ali if he’d like to leave.  Despite the difference in their ages and in their backgrounds, they do.

While walking up the stairs to her apartment a neighbor woman sees Emmi and Ali going into her place together.  She immediately gossips to the other neighbor women.  After a few drinks Ali and Emmi end up in bed.  When they leave together the next morning this just stirs up the women more.  Emmi is a cleaning woman and Ali is a mechanic, so each probably would have said they had seen some of the worst that life has to offer.  They would have been wrong.

Emmi tries to seek Ali out again at the café, but he isn’t there and she just gets a hostile reception from the Arab people that are in it.  When she returns to her apartment she finds Ali waiting outside it, getting equally hateful stares from the white women in the building.  One of them reports her to the landlord, and in a panic Emmi tells him she isn’t subletting to Ali like he thinks; but that they are living together before getting married.  Satisfied, he goes away, but now Emmi and Ali have to go through with the lie and make it real.

When Emmi tells her grown children they react horribly.  A son-in-law (Fassbinder) violently destroys her TV.  Later, her co-workers pretend she doesn’t even exist and the women in the building tell her that she needs to clean up after Ali because he’s making the building dirtier.  Ali isn’t faring any better.  A local grocer pretends not to understand him in order to refuse him service.  An Arab woman he knows calls Emmi an “old whore” and tries to lure him away from Emmi and to her bed instead.  Will Emmi and Ali break up?  Will they stay together?  Will the virulent hatred continue against them from everyone they know?

Mira won Best Actress at the German Film Awards for her portrayal of the older, lost Emmi, who despite everything falls in love with a man everyone thinks is wrong for her.  ben , who was Fassbinder’s lover at the time, seems less polished, but you can tell that in some scenes Fassbinder must have used his own relationship with ben and the hatred they received as material for what he put in the film.  ben seems more naturally reactive in those, as if he doesn’t have to search for the right emotions.

Mira had a very long career, stretching from just after WWII up into the 2000s.  Strangely, even though he was much younger than her, ben died of a heart attack just two years after making this film.  It is easily his best known role.

If the description of Ali: Fear Eats the Soul sounds familiar it’s because you’ve probably seen the 1955 movie All That Heaven Allows.  Reportedly, Fassbinder was a fan of Douglas Sirk, who directed it.  In that film older well-to-do widow Jane Wyman falls in love with her younger gardener Rock Hudson.  In this case it’s their social classes that separate them and that brings down the condemnation of her children upon her.  Ironically, both leading men happened to be gay in real life and at the times their movies were made they would have received a whole other level of condemnation had it been widely known.

Ali: Fear Eats the Soul is a good film that didn’t quite reach great status for me.  It’s probably the most mainstream of Fassbinder’s movies and is probably a good place to start if you’ve never seen anything he has done.  If this film sounds interesting then I recommend you give it a try.